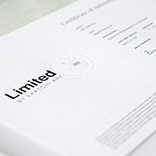 Certificate of Authenticity:Yes, Signed and Numbered

Exclusive to Saatchi Art:Saatchi Art’s curators have worked with artists from around the world to hand-pick every artwork we offer as Limited in order to provide you with an unmatched selection of limited edition prints. We are proud to offer "Expressus Polystichum" by Marianne Hendriks, which is available exclusively on Saatchi Art.

Framing Options:Custom frame options are available in solid wood and each framed artwork ships ready to hang––right out of the box. Choose from black, white, or natural wood frames in a classic "box" style.

California law provides for disclosure in writing of information concerning certain fine prints, photographs, and sculptures prior to effecting a sale of them. This law requires disclosure of such matters as the identity of the artist, the artist’s signature, the medium, whether the multiple is a reproduction, the time when the multiple was produced, use of the plate which produced the multiple, and the number of multiples in a "limited edition." If a prospective purchaser so requests, the information shall be transmitted to him or her prior to payment, or the placing of an order for a multiple. If payment is made by a purchaser prior to delivery of the multiple, this information will be supplied at the time of or prior to delivery, in which case the purchaser is entitled to a refund if, for reasons related to the matters contained in such information, he or she returns the multiple in the condition in which it was received, within 30 days of receiving it. In addition, if after payment and delivery, it is ascertained that the information provided is incorrect, the purchaser may be entitled to certain remedies, including a refund upon return of the multiple in the condition in which it was received.

CERTIFICATE OF AUTHENTICITY AND WARRANTIES

AVAILABILITY OF OTHER PRODUCTS THAT INCLUDE THE SUBJECT ART WORK

Marianne Hendriks shares her wonderment of nature in a painting practice highly informed by her background in architecture and design. With each distillation of a leaf into a simple abstraction, Marianne attempts to make sense of the world by categorically manipulating geometry and form. Her oil paintings possess a rhythmic quality, created by the repetition of pattern and texture, and seek out balance between realism and highly stylized expression. Marianne returned to the Netherlands after graduating with a BA in Architecture & Spatial Design with Honors at Central St. Martins, England. Her works have been exhibited in Amsterdam, New York, London, and Italy, including The Other Art Fair London and Brooklyn. Marianne's paintings have been featured in various publications, including Vogue Living NL, and her work was selected for special projects with Sheraton and Eden Roc Hotel. Text: Monty Preston, Curator Saatchi Art

Handpicked to show at The Other Art Fair presented by Saatchi Art in London, London, Brooklyn, London, New York